Unfortunately this was the first ever night that I was unable to attend but from all accounts it was a great start to the year. We'd decided the theme this particular evening around obscure fighting games and so Ian chose Karate Champ his tournament , which was won by Mr Jack.

Thanks to Richard Youell for this photo.

Our first British IBM gig of 2016. Dave and I did a little acoustic set at The Sun Inn, Waterbeach as part of the Beach Sessions, an extremely well run and promoted evening. Really couldn't have asked for a better audience, the room was packed to the point that we couldn't get to the stage through the audience and had to use the fire exit behind the stage area to get on. We were first on followed by the very talented Atomized and Creep Neighbour.

Next gig: We'll be performing another acoustic set at The Architect, Cambridge. Sunday 3rd September 2016. We all know that the phenomenon of bad video games didn’t begin and end with E.T back in the 1980s and that for every great game there are always several awful games that balance things out in the gaming Universe. Joined by celebrity YouTuber and author of ‘Terrible Old Games You’ve Probably Never Heard Of’ Stuart Ashen we’re putting on an exhibition of some of those forgotten stinkers. That’s right! We’re dedicating an entire exhibition to the games that wasted our time, effort and hard earned pocket money as kids and the games that we never played because they scored so low in gaming magazines that..well why would we?

So come along and re-live the agony of playing some of those terrible old games that you threw in the bin or returned to WH Smiths as a kid. Stuart will be hanging out at the museum for most of the day if you’d like to meet him or to get anything signed.

The more astute of you may have already noticed that I've added a couple of extra sections to the website. Retro Video Game Night and Retro Road Trip. The first of which contains info on all the previous Retro Video Game Nights that I organise along with the likes of Ian Guebert at the Centre for Computing History in Cambridge. So if you want to check out some photos from previous events or find out what tournaments we've done and who won then check it out. I've also added all the links to the upcoming nights. 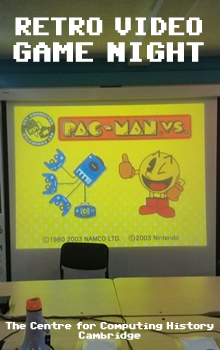 Our song Sugar Water seems to have increased in popularity quite a bit recently, possibly due to its prominent placement in From Bedrooms to Billions. A few people have asked me what it's about and so here's a YouTube video to explain just that. Enjoy!